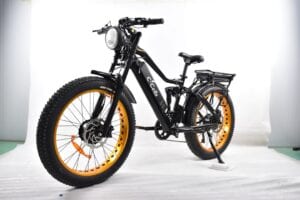 It just keeps getting better and better…

We here at E-Cells are constantly providing new innovative products that have made us a recognized pioneer in this industry and you, the consumer, have played an important role in this process. You asked for it so here it is!

This year we are happy to announce a whole new style of E-Bike with: A Dual Motor, Dual Battery, Dual Suspension, and now a  DUAL CROWN FORK!

This baby has all the standard features of our existing E-CELLS SUPER MONARCH AWD 1500 CROWN bikes, plus the following:

Each bike will receive the following accessories:

OVER $150 IN ACCESSORIES included with order:

Free U.S. shipping on all orders

Questions? Request a Call Back

If you have any questions please contact us at 702-960-2015. You can also request a callback using the form below.